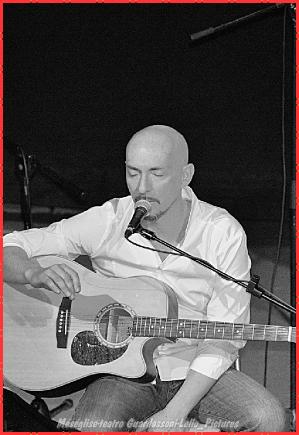 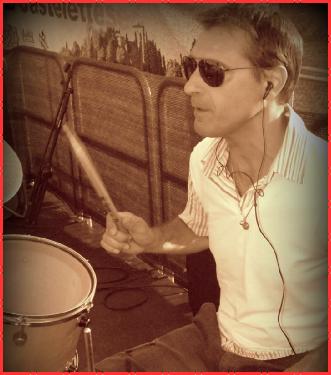 Aged 8, he receives his first guitar as a gift from an uncle, with no remarkable results. He will try again aged 12, with a fantastic classical guitar (..with metal strings though!) and that’s when he begins to play a bit more seriously. He attends rhythm guitar and music theory lessons with a private tutor and at 14 he starts rehearsing in his house garage with a drummer, playing cover songs and a few songs written by them. He joins the first band in 1985 (Fantastic Fly, then Crocodile 's Evirator) where he sings and plays the electric guitar and with whom he participates in several music festivals in Bologna and in the selections for the Castrocaro festival with the song "Meno tredici al duemila", written and arranged with the help of bassist Domenico Loparco. After the band splits in the late '80s, he joins Greengroucers, another Bolognese band from that decade, as a singer and a rhythm guitarist. In 1991, he replaces singer Paolo Marcheselli in the progressive rock band Sithonia, and takes part in the realization of all their following works: 5 cds , 4 of which recorded in studio and 1 recorded live. All of these albums, thanks to their distribution and to the many reviews in several languages, ​​are known all over the world by fans of progressive rock. In parallel to this long experience he is a member of the prog-metal band Opera for a few years, with Roberto Magni and Valerio Roda, with whom he shares the Sithonia experience, and drummer Maurizio Lettera. At the end of the '90s, along with Paolo Nannetti, who was also part of Sithonia, he works on a project, and after several lineup changes they give birth to the current Méséglise project. His passion for theater and musical forms leads him to participate (as a solo singer and backing vocalist) in several projects of this kind, always under the direction of Patrizia Caroli, such as "Piazza delle Gocce", "C'era una volta", "Semplicemente amore" and "La locanda di Emmaus".

He approaches the magical world of drums in 1988 when he begins to attend private lessons which he continues for four years. From this period on, he plays in several bands (playing both cover and unedited songs), focusing on rock, pop and prog. Among such experiences, one of the most important bands he plays with is the the prog metal band “Opera”. With Opera he plays from 1994 to 1999, and records a demo called Ataraxia, which turns out to be well reviewed by several magazines. In 1999 he decides to study in deep the instrument and flies to the States, where he graduates the following year at the "Los Angeles Music Academy" in Pasadena (California). There he studies with world-renowned teachers, including Joe Porcaro, Ralph Humphrey, Mike Shapiro, Michael Packer. As he returns to Italy, he begins to teach drums in different schools of music, then in 2004 he leads the group of “tamburini" (drummers that play in the streets during local parades) in San Pietro in Casale (BO). He also plays in several bands embracing various genres of music. In 2004 he becomes part of the new country & texas music band called "The Claw", which soon becomes the most important Italian band in this genre. With The Claw, in fact, he opens the concerts of some of the major Texan stars (sharing the stage with them), such as Cory Morrow, Roger Creager, Todd Fritsh , Brent Mason, Dub Miller, Drew Kennedy, Rodney Heyden, Stoney Larue. The Texas Music Times magazine dedicates a nice article to The Claw “phenomenon”. The Claw also follow (and play with) Scott Shipley (a famous American multi-instrumentalist country musician from Nashville) during his Italian tour dates. With The Claw, Maurizio Lettera plays almost everywhere in Italy and does some gigs in Europe as well. Among these, the band plays at the Four Corners Club in Germany, quite famous in the country music world. In Italy The Claw take part in important festivals, such as the Savoniero Country Festival, the Christmas Pordenone Country and Titan Country Night in San Marino. In 2012 he plays with Sithonia at an event called “Prog Made in Bologna”. In 2013, the musical project “Méséglise” becomes a real thing, and the band’s debut album "L’Assenza" is released, for which the recording process had already started back in 2006.

He studies privately guitar, accordion, piano and saxophone, and begins writing songs aged 13, recording them with a friend using the very first tape recorders. His first concerts are at the end of the school year parties (high school), but the onset is on a stage in July 1974 with a band called Senso Unico Alternato, playing both unedited songs and a few covers (British progressive rock genre). In the following years, while continuing to write songs interpreted as a soloist, he also engages in various bands who play acoustic music, where he alternates his own compositions to some instrumental tracks: Dieta Folgore (1976-1977) Piantamusica (1978-1980). In the early '80s, spurred on by a deep passion for the European folk music, especially for the Breton musical tradition, he puts together and starts playing with two bands: Molly Maguires and Ortivalse. At the same time he is part of an ensemble from Tuscany (Red Wire) with a repertoire dedicated to the traditional Tuscany and Tuscan-Emilian Apennines music. All these experiences translate into frequent live performances and several demos are recorded. In 1985/86 he founds the band Sithonia, a progressive rock band, and with them he records (in the period 1989-2011 ) 1 self-produced LP and 5 CDs (among them they record a live cd) first with the label Mellow Records, then with the label Lizard. Other participations complete the discography, such as compilations produced by Toast Records and by the finnish label Colossus. These jobs are distributed and reviewed in the world and are well known by fans of the Italian progressive rock genre. In the year 2000, with Marco Giovannini, he produces an EP called "Un mare di cartone" which will be the embryo of the project “Méséglise”.

Maya comes from a family of musicians, so music was always something natural for her. She walks on her first live stage aged four, with her father playing the piano for her. Maya takes music lessons while growing up: singing, piano and guitar. At 16 years old she starts her first band experiences: the genres vary widely, from rock, to electronics, funky, pop. In 1997 she joins a choir called Canticum (Bologna) directed by Tania Bellanca; this is a “musical" project and in particular the choir performs, on various public occasions, a free interpretation of the famous "Jesus Christ Superstar “. For some time Maya joins another choir from the "Orazio Vecchi" music school in Modena , conducted by the Maestro Massimo Carpegna. Maya lives in London for almost a year between 1999 and 2000, and here she joins a band in the role of singer. In London she has the opportunity to work with Philip Rynhard, an English musician of great talent, thanks to whom she gets to meet one of Eric Clapton’s guitarists and she works with them for the vocal arrangements and recordings (background vocals) of one of the new songs written by Philip at the time, called "Faded & Torn". In London Maya also records her first demo cd, called "Shades of Purple".In 2004 she takes part in the competition "Cantalions" organized by the Bologna Lions Club, presenting a song written by her and getting both first prizes for best interpretation and best composition. She has other musical experiences between 2003 and 2004, with a celtic/folk style band, as singer / guitarist / keyboardist, and with them she performs live shows with unedited tracks as well as songs from the Irish music tradition. With this band, among others, she takes part in an important European bands competition. From 2008 she starts working on the arrangements of several of her new songs (entirely composed in English), and after a while she starts the recordings. This is when her first CD, "Visible Love," comes out, published in 2011. The cd is currently on sale (pls contact maya.seagull@gmail.com to if you wish to purchase her cd). Since 2011, Maya’s been singing in the "Modena Gospel Chorus". Her career as a bassist is actually quite recent and begins almost as a “bet" among friends. But Maya loves this instrument immediately. From here, the step that leads her to collaborate with Méséglise is very natural, and she soon establishes a great musical and human feeling with the band, so she gladly accepts a long- term cooperation with Méséglise 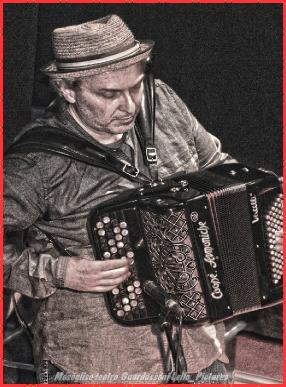 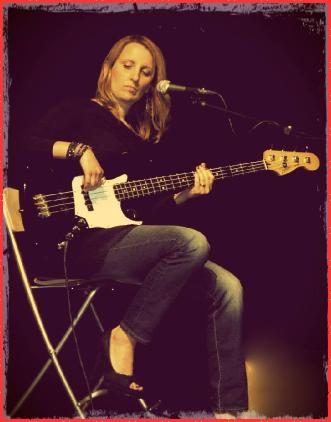 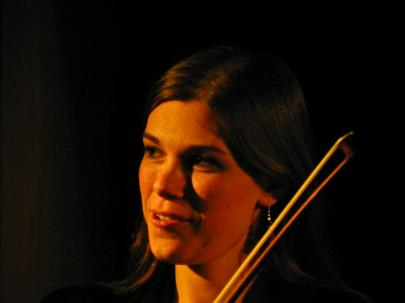 Maria's first contact with music happens at the age of 7, when her parents enroll her in a music school for children. She tries singing and playing piano with bad results, then hears for the first time the sound of a violin and falls literally in love with it. A few months later she starts taking private lessons and then enrolls in the Orazio Vecchi music institute of Modena, where she graduates in 2008 .While studying classical music, Maria gets in touch with other musical genres and in 2003 she joins a celtic style band, where she meets Maya (Seagull). After her graduation, she deepens her passion for ethnic music, joining the Multicultural Orchestra of Modena in semptember 2010. A few months later she also joins Nakriz, a group of rai music born within the same Multicultural Orchestra. The following year, during a stay in Syria, she experiences the traditional arabic music and plays violin in a trio with 'oud and classical guitar. In 2010 she starts a collaboration with pianist Francesca Fregni which leads to the creation of a duo, evolving from classical repertory to minimalist music, also rearranging and adapting some famous rock and pop songs. With her she also plays in the musical Hairspray in 2011. At the same time Maria keeps playing and studying classical music, being part of the orchestra of the University Ca 'Foscari of Venice and youth orchestras such as Euphonia from Modena, Adrian Ensemble from Reggio Emilia and Orchestra Giovanile Uto Ughi per Roma, which performs every year in Rome during a festival created by the famous violinist Uto Ughi. In recent years she discovers a new passion for mandolin and joins the Piccola Orchestra Mutinae Plectri of Modena. She meets Méséglise through Maya and, while listening to their songs, she becomes more and more passionate about the project; that’s when, in 2014, she finally decides to join the band as the violinist 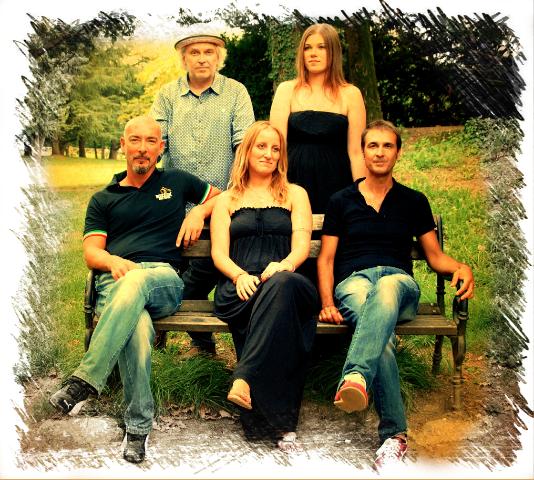